The farm was named in honor of Phoebe Ann Evans Steele (New York, 1835 – Boulder, 1908), a remarkable pioneer and one of the very first female homesteaders of the American West. 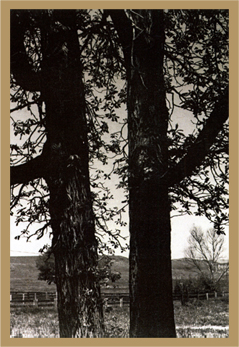 Before embarking with her husband and their children on a hazardous journey across the Great Plains, Phoebe took two small saplings of her garden’s old oak, a tree she had been very attached to. After weeks of seemingly endless traveling in their oxen-driven wagon, the family finally arrived in Boulder on October 11, 1865. A few days later, her husband died of typhoid, leaving her stranded with two children and an infant to care for in a rough land. But Phoebe was determined to carry out her and her husband’s dream. In 1869, after having successfully fended for herself, Phoebe bought a claim on a homestead East of Table Mountain and laid the foundation of a very prosperous farm. She also planted the two saplings of her Wisconsin oak tree, which grew to become magnificent oaks.

Today, Twin Oaks Farm is a center for equine-facilitated psychotherapy and healing arts, as well as a riding and boarding facility. The farming tradition lives on: Twin Oaks Farm also produces a high-quality grass hay and alfalfa for its twelve equine residents, its llamas, and goats.

All services offered in English, Spanish, French, German, and Portuguese.